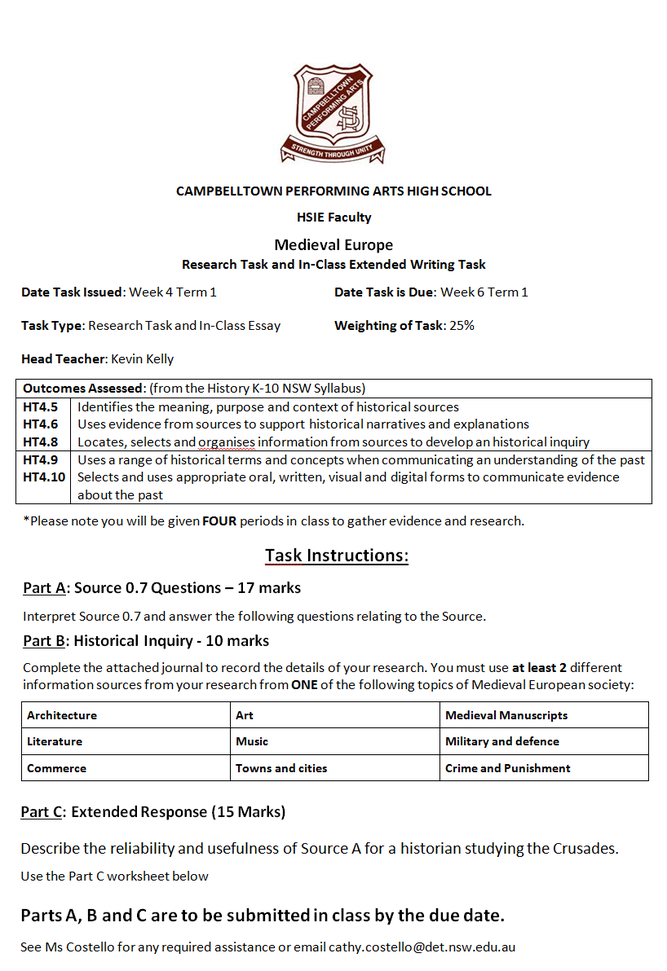 Download File
Scaffold to help you with Part C

Information Sources
Primary or Secondary Source?
Use the link above to find out more.

Cities and Towns
Commerce​
Feudal System
Knights
The Crusades       This website has an explanation of the crusades. ​

Crusades, military expeditions, beginning in the late 11th century, that were organised by western European Christians in response to centuries of Muslim wars of expansion. Their objectives were to check the spread of Islam, to retake control of the Holy Land in the eastern Mediterranean, to conquer pagan areas, and to recapture formerly Christian territories; they were seen by many of their participants as a means of redemption and expiation for sins.

The Crusades constitute a controversial chapter in the history of Christianity, and their violent excesses have been the subject of centuries of historiography. The Crusades also played an integral role in the expansion of medieval Europe. People were able to be persuaded to be involved in the Crusades because of a popular belief at the time that the end of the world was near.

Crusaders believed that by fighting in what was described as a "holy war" that they could have their sins forgiven and be granted entry to heaven.

Crusading was represented as penitential warfare. This means that crusading was believed to be an act of penance—a way to make amends to God for sins one had committed, so that an individual could achieve salvation. It means that crusading was not simply seen as a necessary evil—it was seen as a positive spiritual good for those who participated. Participants were not merely excused for their involvement; they actively acquired spiritual merit. In the simplest terms, crusading was presented as a good deed, even though it involved killing people.

To make sense of this, we need to recognise that violence was often perceived to be much more morally neutral in medieval Europe than it is today. Violence acquired its moral value from intentions and context, like who was performing the violence and to whom it was done (this should remind you of Augustine’s just war theory: cause, authority, and intentions). Thus, the same action—let’s say, hitting someone in the face—could be immoral and unchristian in one context, and moral and Christian in another.

Given the penitential element in crusading and the number of expeditions that involved long journeys to holy places, it is not surprising that crusading was often described as a pilgrimage, a journey to a holy location like a shrine, a church, or even an entire city, like Jerusalem. Those who went on pilgrimage frequently sought spiritual advantages, like forgiveness of sins or a closer relationship with God or a saint; they also sometimes hoped for more earthly advantages, like healing. Pilgrimage was a sacred act for medieval Christians, and was itself often an act of penance (sometimes voluntary, sometimes assigned by a priest in confession). Crusading borrowed some of the language, rituals, and symbols of pilgrimage, and shared its penitential nature.

Most histories of the Crusades tend to focus on the Crusaders themselves and the perspectives of European Christians seeking conquest and plunder in the Holy Land. But what about the Muslims whose lands were invaded and cities sacked? What did they think about these religious armies marching out of Europe?

To be honest, they didn't even know that there was something to be concerned about at first.  When the first European armies hit Syria, Muslims there naturally thought that this was an attack from the Byzantines ( the east Roman Empire)and called the invaders Rum, or Romans.

It was probably not until after permanent kingdoms were established in the Holy Land and regular reinforcements from Europe began arriving that Muslim leaders began to understand that this was not Rome reasserting itself or Frankish imperialism anymore. No, they were facing an entirely new phenomenon in their relations with Christendom - one which required a new response. That response was the attempt to create greater unity and a common sense of purpose among Muslims. The first leader to begin uniting Muslims was Nur al-Din, and his successor, Salah al-Din (Saladin), is remembered even today by both Europeans and Muslims for both his military skills and his strong character.

Occasionally religious fervour took hold amongst the Muslims and inspired them to participate in campaigns against the Crusaders, but much of the time people who didn't live around the Holy Land simply didn't worry that much about it. In the end, the Crusaders didn't leave much impact. Muslim art, architecture, and literature are almost entirely untouched by the extended contact with European Christians. Muslims didn't feel that they had much of anything to learn from the barbarians who came out of the north, so it was a very rare scholar to took the time to find out what the Christians thought or did.

The Jewish caught in the middle
There were Jewish communities, some quite large, throughout Europe and the Middle East before the Crusades. They had established themselves and survived over the course of many centuries, but they also provided tempting targets for marauding Crusaders looking for infidels to attack and treasure to loot. Caught between two warring religions, the Jews were in a most precarious position.

One should not be misled into thinking that all of Christendom was united in violence against the Jews - it isn't even true that church leaders were so united. There was, instead, a wide variety of attitudes. Some hated the Jews; saw them as infidels, and concluded that since they were marching off to kill other infidels, why not get a head start with some locals. There is no way to tell how many Jews died in Europe and the Holy Land at the hands of Christian Crusaders, but most estimates put the numbers at several tens of thousands.

Both Christian and Muslim communities continue to look back upon the Crusades as a time when devout believers went to war in order to defend their faith. Muslims are seen as defenders of a religion that relied upon force and violence to propagate itself, and Turks even today are viewed through the lens of the threat the Ottomans posed to Europe. Christians are seen as defenders of both a crusading religion and imperialism, and thus any western incursion into the Middle East is regarded as simply a continuation of the medieval crusading spirit.

In truth the Crusades were a spectacular failure for the Europeans and the land conquered was relatively small. Today the Crusades continue to be a sensitive issue as though Islam had lost, and sometimes current problems are actually attributed to the effects of the Crusades. Yet Muslims suffered no long-term effects from the Crusades, and in fact Muslim forces rebounded to capture Constantinople and move further into Europe than Christians moved into the Middle East. The Crusades were not simply a Muslim victory but, over time, proved Muslim superiority in terms of tactics, numbers, and the ability to unify against an external threat.